It is such a pleasure to introduce Doug and Diane Gnepp. They embody the spirit of Iyengar yoga with their sense of adventure and the openness they bring to the mat in every class. It is a joy to watch them explore all aspects of their practice as they grow into seasoned practitioners together. They are a great example of how to live yoga in every aspect of your life. You will find them at the studio Mondays, Wednesdays and Fridays. Don’t miss the opportunity to say hello as their positive energy is contagious!

Tell us a bit about yourselves:

Diane: Doug and I came to the Happy Valley 3 years ago so that we could live closer to our grandchildren. We moved from Providence, Rhode Island where we lived for 25 years.  It was there we raised our family of two sons and our wonderful yellow lab, Gracie.  Doug was a surgical pathologist at Rhode Island Hospital and a Professor of Pathology at Brown University.   I was a neuropsychometrist at the VA hospital and also worked at Butler, a psychiatric hospital.  I spent many days observing peoples’ performances on tests of intelligence and memory.  We both retired when we moved here, but for the past three years Doug has been writing and editing a textbook on head and neck pathology, which is his area of expertise.

Originally I am from St. Louis and Doug from Philadelphia.  We met in St. Louis during his residency when a friend of my Mom’s fixed us up, (which is something I would never consent to do.) On our second date, I was taken to witness an autopsy and I didn’t pass out. And so, began our 43-year relationship of navigating each other’s lives….

How long have you been practicing yoga?

Diane: I began practicing yoga when I was in college.  I practiced Hatha yoga which consisted of an hour of rigorous calisthentic exercises, a cold shower and then an hour of asanas.  We used just a yoga mat and no props.  We held poses for a very long time and received few corrections.  I continued for several years and when we had our first son, I began to teach him yoga poses by being a rabbit, a tree, a mouse and I still continue to do this practice with our grandchildren. However, it wasn’t until we moved to Providence that I discovered Iyengar yoga.  The first teacher I had was so strict that I only endured two years and took a break. Doug joined me for the first time when we found a much gentler but practiced teacher.

Doug: Most of the time it’s really fun, especially when you work in pairs or small groups. We are not always in the same group but when we are it is a very positive experience.

Diane:  When I bought Doug a mat and a series of classes as a Chanukah gift, Doug took to yoga right away.  At first he had his beginners’ classes and I had my own which felt just right.  When Doug was given permission to join my class it became a bit more challenging.  I was so used to yoga being my space and place of autonomy.  I felt I needed to teach him the dos and don’t of yoga etiquette and I struggled finding a boundary between his mat and mine.  Gradually over time I have learned to be on my mat and to give him space to be on his. I must admit that when it comes to finding a partner, most times I am very happy mine was schlepped from home.  There are also the few times that we have rescued one another from going “too deep” in Savasana and a gentle nudge brings the other back to the surface.  Or the “assistance” we give one another when one person missed instructions but neither of us are correct.

What keeps you on the mat?

Diane: What keeps me on the mat is that once on the ground I really struggle to get up! I had hip replacement surgery three months ago and shifting positions are still a challenge.  The surgery has also motivated me to try to develop a home practice so that I can strengthen areas of weakness as well as finding a place to come to stillness.

What keeps you off the mat?

Diane: I agree; keeping a yoga mat and props out helps to draw me back out of inertia. 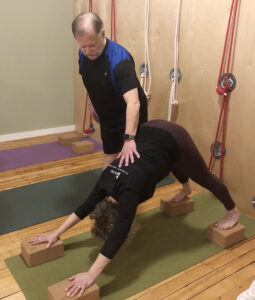 What poses do you love?

Doug: I especially enjoy working on the ropes

Diane: My favorite pose is downwardfacing dog (Adho Mukha Svanasana) using the ropes.  I like both the support I feel descending into the pose and ascending with hands on hips and ending in Tadasana.

What poses do you find challenging?

Diane: I find many poses challenging these days; balancing and any poses that require use of the hip adductors.

What do you like to do when you are not doing yoga?

Doug: Spending time with my grandchildren, working with wood, reading, especially mysteries and adventure stories. Hiking, being out in nature; I used to do a lot of canoeing.  This is something I would like to get back into.

Diane: When I am not doing yoga, my number one priority is being with our grandchildren and being a part of their lives. They usually spend one night every weekend with us and most times we feel we are the luckiest grandparents in the valley.  I also like to hike and travel.  In addition, I volunteer on various committees from our synagogue.

How has practicing yoga impacted your life?

Doug: It has helped my overall feeling of well-being and improved my mobility and strength.

Diane: For me yoga is about relationship: to my body, spirit and my connection with the other people in our class.

How has yoga impacted your relationship with your spouse?

Doug: It is something fun we can share together; I look forward to going to class together.

Diane: Yoga has become a place where we have a mutual community as well as a way of being together in the world with a greater depth of understanding. Yoga has enlarged our container of handling the angst we feel.

How does our yoga community contribute to your practice?

Doug: It’s nice to get to know participants, but it does take a while to “break the ice”.  The more classes I take, the more comfortable I become. It is a warm, welcoming environment with all of us having somewhat similar goals.

Diane: Thanks to Susan Elena, we have created a community that shares a space filled with light, and encouragement.  We are witnessed for our imperfections, mastery and attempts to challenge ourselves.  We share aches, pains, Dr. names and a connection of understanding what it means to grow older without growing too old.  We are very grateful to have found this magical place for ourselves and our mats.

Any advice for beginners?

Doug: Keep practicing.  You will improve.

Diane: Yes and don’t be hesitant to use props and be grateful for all the instruction you are receiving.

Any advice for couples taking up yoga together?

Doug: Don’t give each other too much advice.

Diane: Breathe and take in the blessings of the moment – Namaste