It is such a pleasure to introduce Linda Shea who was a regular at the studio prior to the pandemic and now a core member of the Yoga Vrksa Immersion morning crew. She was new to yoga when she arrived at the studio and jumped right into the practice without hesitation. She truly is a natural yogi with her deep focus, sensitivity and quiet determination.

Tell us a bit about yourself – I am originally from the great northwest – Seattle, one of 5 children.  We were “Boeing Brats,” meaning we moved around the country every couple of years – New Mexico, Texas, Mississippi (during the civil rights movement) back to Seattle, Miami, and finally settling in Colorado where I lived for 17 years.  My father was an aeronautical engineer with Boeing and later in life, my mother owned a travel agency in Denver, Colorado.  My brothers live in Denver and my sisters live in Seattle, and we live in Northampton near Smith College.

I met my husband of 35 years in the doctoral program at the University of Colorado – Boulder. I studied marketing and psychology, and he was in strategic management. Upon graduation, I started as an Assistant Professor at the University of Hawaii and being from the Berkshires, he came to UMass – Amherst.  We were happily “Maui-ed” in 1985 on Kaanapali Beach by a Kahuna guy who drove us and a
couple of witnesses we grabbled from the beach up to the cliffs in a Volkswagon bus. When we retired a few years ago, we had to produce a marriage certificate and were relieved to find one actually existed. I moved here and taught at UConn one year before joining the business school at UMass. This is the longest I’ve lived anywhere! Later on, I was a Professor in the Hospitality and Tourism Management Department focused on the graduate program, establishing a dual degree MS/MBA and a Ph.D. program. I have served more than 15 years as an Executive Editor for a few scholarly journals. I studied consumer behavior issues such as complaint behavior, consumer delight, and customer coproduction in the service process (just as we have our roles and responsibilities in our yoga practice). In my final 6 or 7 years before retirement, I was the undergraduate dean in the business school. In that role, I was responsible for academic programming, student advising, the career center, and served as Chair of the Business Communication Department.  I was so fortunate to work with so many wonderful people there! As a Professor Emerita, I now just enjoy teaching an MBA class online in Services Marketing Management to mostly practicing physicians and other service professionals who want to move into administration and learn more about business.

One of the most meaningful initiatives I developed was the Citizens First program, now called Global Citizens to avoid confusion with the America First organization (the opposite philosophy).  It is based on the premise that we are all citizens of the world, first and foremost and our motto was “Community Matters and Character Counts.”  Students could earn a “Good Citizen Certificate” for completing 100 hours of community service – local or international. For several years, we had the largest team (about 100 students and faculty) for the local Northampton Mayor’s annual Hot Chocolate Run in support of the Safe Passage organization serving victims of domestic abuse. One of the other outcomes was a service 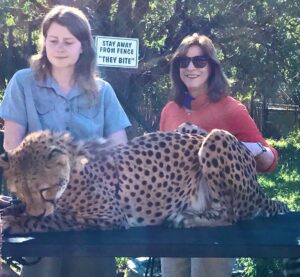 program in the Timbavati (safari) region of South Africa.  We teamed up with the Timbavati Center – an anti-poaching and environmental education organization serving about 1,000 safari rangers and many area school teachers.  Over the course of a few years, we were able to establish about 10 computer centers in area high schools and build sustainable gardens in two HIV – related orphanages.  My assistant who did the heavy lifting on this project has continued this work by creating a foundation to improve the nutrition and well-being of those vulnerable children in South Africa as well as in local communities here in Western Mass. The picture below shows me petting a recovering Cheetah at the Moholoholo Game Rehabilitation Center. I thought it was growling, but it was just purring loudly.  Nice kitty.

What is a little known or surprising fact about you or your work? I was the first woman to graduate with a PhD in Marketing from the CU – Boulder (in 1984).  This says more about the status of business education in the US than it does about me. Not many people know about it because I didn’t even realize it until decades later! I was also an intern in a senate office in 1974 in the midst of Watergate the summer that Nixon resigned.

What led you to Iyengar yoga? How did you find IYCWM? My friend and Jazzercise instructor Patty suggested Iyengar Yoga.  She said it was amazing and different from other yoga approaches and she was right! There’s nothing like it.

How long have you been practicing yoga? I’ve been with the Iyengar method for almost 2 years studying and practicing at least 4-5 times a week. I often wonder what I did without it.  Previously, I had tried many other formats, such as Bikram, other hot yoga practices, some Vinyasa, Power Yoga and even the online Yoga with Adrienne.

What keeps you on the mat? I am inspired by my classmates on Zoom –  my pandemic panacea pals – (my own version of PPPs!) It’s the best way to wake up in the morning and become grounded for the day. 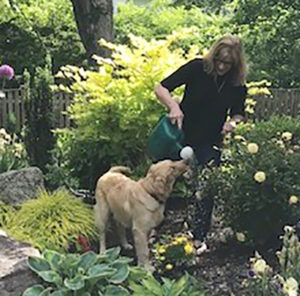 What keeps you off the mat? My Golden puppy Milly (aka Silly Milly!)  She makes me laugh every day.  In the picture, you can see she loves to help with the garden – especially digging and watering.  She has to drink water for each flower before she stomps on it and moves to the next with me. My daughter Jennalee and her husband Rob live in San Diego.  We were finally able to visit recently and made a little garden for their new house. Also, in January, in a moment of lapsed sanity, we bought the Old Mill Inn in Hatfield, renovated it from top to bottom, and recently reopened.  Milly is the mascot and “greeter” at the Inn and loves her job.

What poses do you love? I recently realized I love poses involving holding the toes such as Padahastasana, Utthita Hasta Padangusthasana, and Vasisthasana.  I also like inversions such as head stands (Sirsasana), shoulder stands (Sarvangasana), and arm stands (Pincha Mayurasana). Actually, I love most of them.

What poses do you find challenging? Same as above! But I still love working on them. In particular, though, the Eagle pose is difficult because it’s challenging for me to wrap the legs.

What do you like to do when you are not doing yoga? I work out consistently, doing one thing or another.  Lately, in addition to yoga, I do Jazzercise and go for a run most days.  I’m not really a runner, though.  Runners like to run; I like cake.  Unfortunately, I like to bake. I participate in outdoor sports like 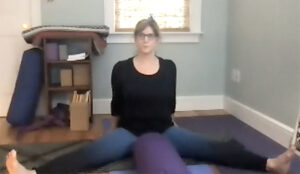 kayaking and cycling as well. I also play classical piano (and make even more mistakes than I do in yoga, but less often than I did before yoga). I played the cello as a teenager and my husband recently bought one for me so I can accompany myself.  I thought the knowledge and skills would come flooding back, but it’s not going that well.  As things open up, I should probably take some lessons.

How has practicing yoga impacted your life?  Yoga has positively impacted my life. After the devastating loss of our son two years ago, yoga has been a healing mechanism.  It allowed me to “get out of my head” enough to be at peace in the present and to move forward.

How does yoga show up in your everyday life? I find yoga to be cleansing for the body and mind.  My posture has improved, too, One day my husband said he couldn’t find me in the grocery store for the longest time because he was looking for someone hunched over the produce.  Then there I was in plain sight standing “in my legs” tall and straight snagging that avocado with confidence!

How has the pandemic changed your daily life? How are you dealing with the COVID-19 crisis? Does your yoga practice help you in any way? I have always been a relaxed, laid-back person, perhaps a biproduct of living in Colorado so long.  I like to say I really don’t “do” stress.  I have been out of my comfort zone for so long, I am actually comfortable with it. However, the yoga immersion practice has brought my focus on what is important and less on myself. We talk about the medical and wellness aspects frequently and I believe Iyengar is also perfectly suited for athletes and helps people perform at a higher level in just about everything they do, physically and mentally.

What has it been like to become part of a virtual yoga community where you do not know some of the other students? It was different having classes on Zoom at first, but the community aspect emerged immediately as we all settled in. The immersion programs help in adapting to the virtual format since we are with one another first thing most mornings. Of all the areas in my life that have pivoted to streaming formats, this transition has been the most seamless.

How does this yoga community contribute to your practice? Yoga brings peace and joy, but the community is the inspiration. I look forward to seeing everyone every day.

How has the switch to online classes during the pandemic affected your sense of community? How does it help stay connected? How does it fall short? The online format is incredibly convenient and feels intimate as we talk to each other form our homes.  I will enjoy seeing everyone in the studio again, eventually.  I miss the ropes classes.  It’s such a unique aspect of the practice, but most of us do not have those props in our homes.

Any advice for those seeking to connect to a virtual yoga community? I recommend connecting to the community in any way you can.  It’s not only worth it, but it’s better than you would imagine it to be. Just do it and love it!